I am writing this report to record my learning from being a SCKLM pacer for 2nd year, at the same time to share my learning to runners that are aspired to become a pacer one day, sooner or later.

I 1st thought of becoming a pacer when I was doing SCMS 2012, 2 weeks after my 1st sub4 marathon, it was the 1st time I ever used pacers as guide to be on pace and to gauge my performance and timing to possibly achieve another sub4. The 1st sub4 took a toll on me, cramps hit and the rest was history, the report is in another post here: Singapore-marathon-2012-toilet-struggle

That experience gave me the aspiration to be a pacer one day, as soon as possible. Long story cut short and I managed to get chosen as 4:30 hrs in SCKLM 2013. I then set another goal to be a 4 hrs pacer in 2014, and that, is not just saying is as easy as doing, because I have not done another sub4 since the 1st… Taking this goal seriously, I told myself to bring myself back to sub4 performance before I apply for pacer in 2014, to make it meaningful, it has to be the same race that I suffered to complete, SCMS 2013 (PBIM 2013 was out because I already have job commitment on the same date). Story on SCMS 2013 is here: Std-chart-marathon-singapore-2013

So, I was back on sub4 pace and I applied to be 4 hrs pacer for SCKLM 2014, to be sure that I will deliver this duty, the rest of the marathon I joined later seems to become training race for me to get a better feel of pace control and to reduce the instinct to speed in 1st half to save time for 2nd half. Apart from SCHKM that I wanted a PB despite a back injury from accident, the rest of the marathons were about simulations of heat, pace at elevation and different energy intake plans. (4 marathons since then)

Above are just stories and histories. Here are the learning and SCKLM 2014 pacer report.

If your goal is someday to be a pacer, you need to know 3 things:
1.  You need to be very comfortable, confident and capable in doing the pace that you are aiming to pace. Between Aim and Capability, go for Capability 1st. Pacer is a job that needs capability. Aim needs talent.
2.  Always remember WHY you want to do this, if your purpose is anything other than the event, don’t do it, it is NOT about you. This explains No.1; it’s a job, not your aim.
3.  Know that you are a runner too, anything can happen to a runner in any race, can happen to you too. Your capability to handle any circumstances is very crucial here.

I say “you need to know”, so these are not hard rules that one must follow, but it doesn’t harm you to KNOW now than later, I only learnt about the 3rd few days ago. :P

Racing in PNM 10K instead of just taking it as a warm up run had my right hamstring tighten and having only about 2 hrs of sleep didn’t help much on its recovery; I started the morning with slight feeling of throwing out and only recover 30 mins before flag off, took a banana to settle the tummy (thanks for Hong Lan for helping to pick up from my car! J ). Pacers are all given a designated balloon in different colors printed with the pace timing, I prefer to tie it to my arm than the waist to better limit its effect on my runner, 2nd reason is also easier to untie later. 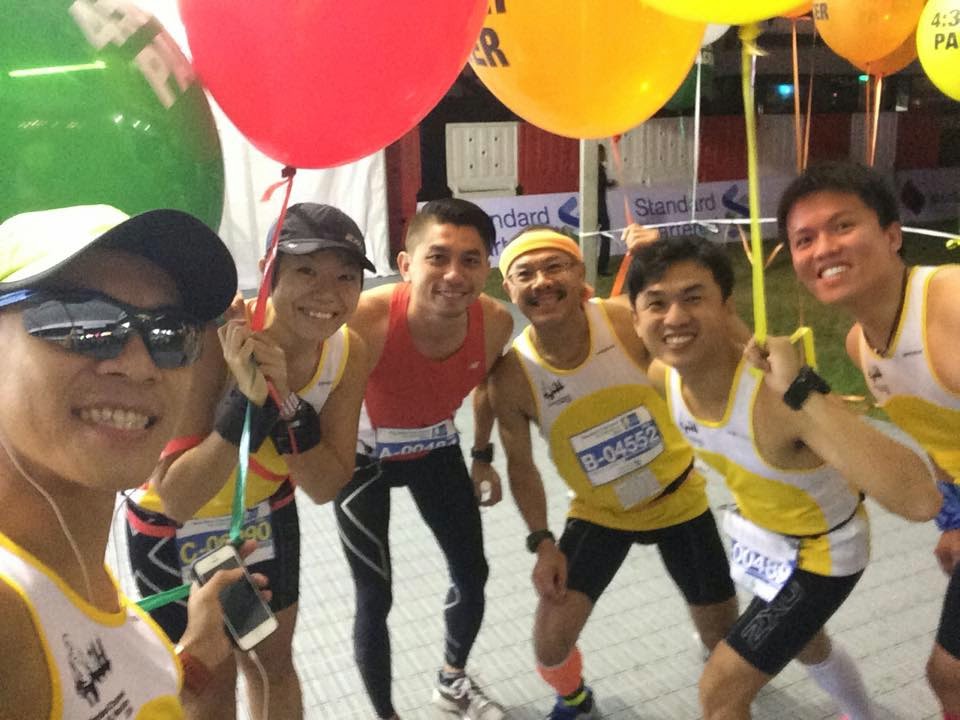 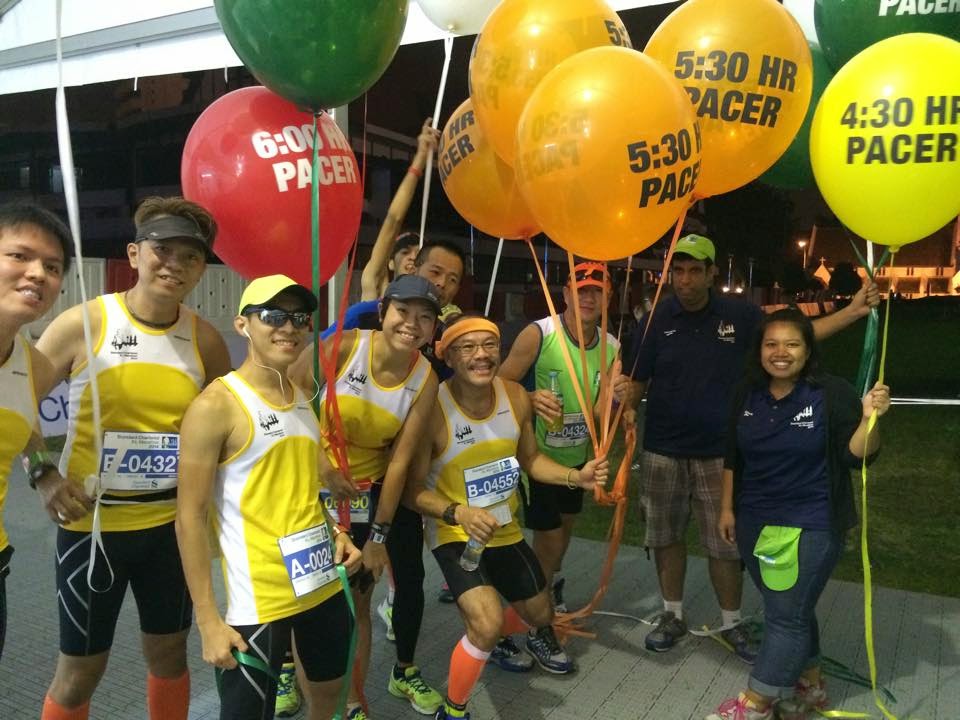 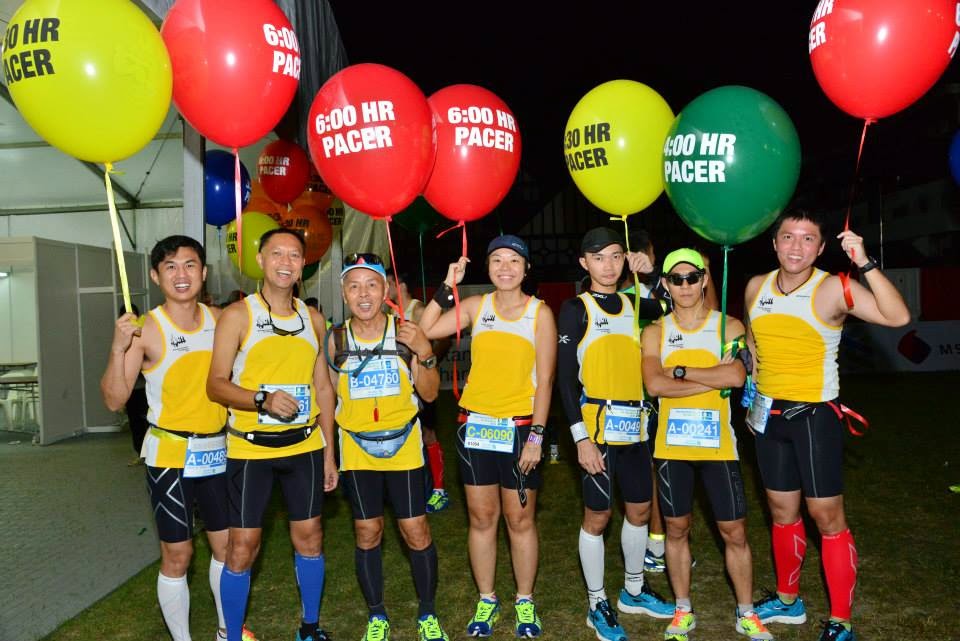 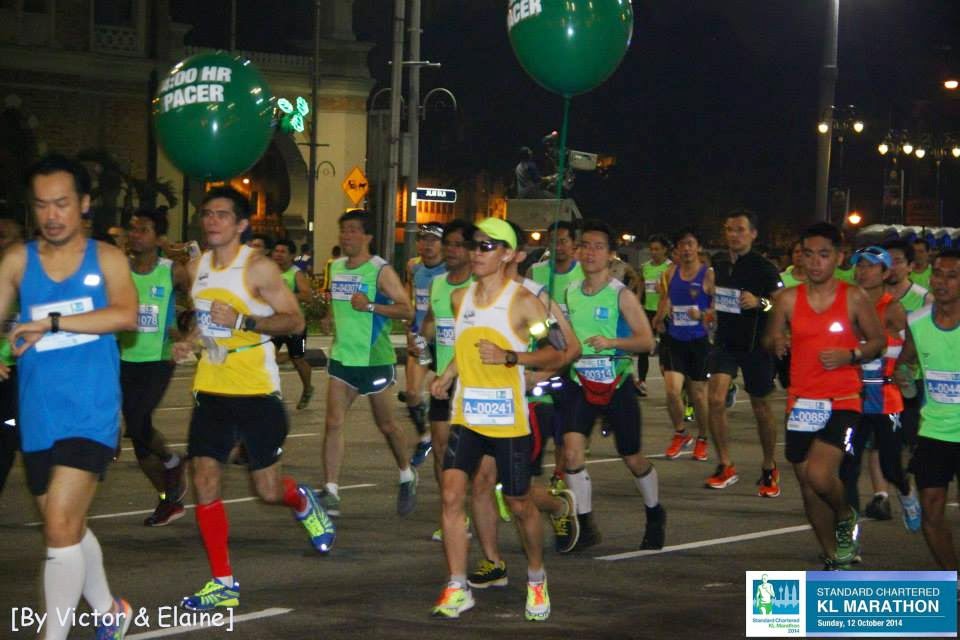 1st 5K into the run, I was holding the pace as easy as I could but I was already sweating buckets, I knew this is not good coz losing too much water in the beginning will cause problem sooner. The GPS signal in the city with tall building went haywire and very soon I clocked extra 500m and the pace on Garmin become very unreliable, I had to trust every distance marker on the route until I figured out how much difference with my watch. The signal became normal after 7/8K entering Jalan Ampang heading towards Great Eastern mall. That dark stretch almost took me out from the run when I land on some uneven spot and almost sprain my right ankle, my bad too coz I started the run with a darker sunglass compare to 2013, so everything appeared 2-3 tones darker. Then I became extremely careful with lighter steps and turned into faster pace.

Entering AKLEH at this point and out in the open I felt much better with less space congestion and more air to breathe (at least it felt so…); hit 10K distance market at 55mins+, which was slightly faster than my plan. 3K into AKLEH, caught up some of the fit girls (initial J), after U-turn I know it will be a longer route before exiting into MRR2, so the 1st test of highway madness began and I started to feel hungry, this is what happened when I am too conscious about the pace with the glycogen in muscles depleted the night before, tank emptying soon… the 1st Oh Shit… 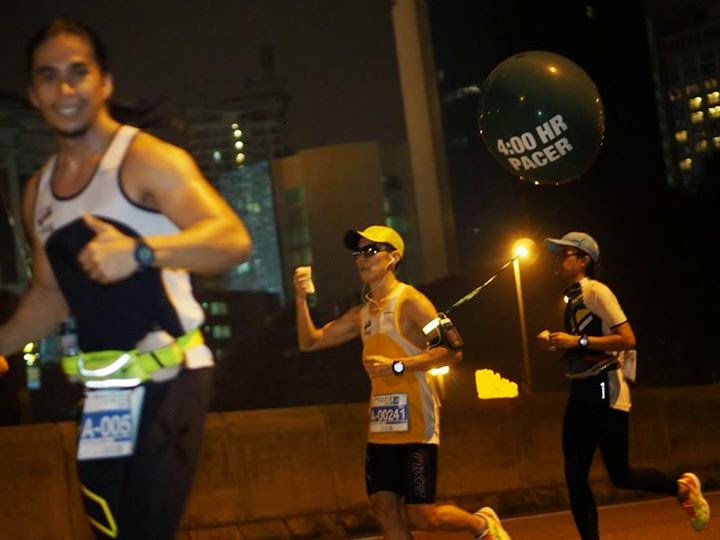 Knowing that this race will provide at least 2 stations with power gels and bananas, I felt more comfortable to take my 1st pack of 2nd surge at around 16K though the plan was at 22K after entering DUKE, that also meant, every plan after this, changed. I started to feel my calves are tightening up and knees started to give in to absorb landing force for the next few km turning into the busy traffic MRR2 stretch that gave me the only insecure feeling in this run. Before I know it, 20K timing mat was right ahead and I crossed at around 1:50 hrs+, meaning to say I would probably hit midpoint at around 1:56 or 1:57 hrs given the next 1K is elevated turn into DUKE.

I was 2-3mins ahead of a perfect timing set by Mark.

The next 10K on the DUKE highway was probably quite inconsistent for my plan as I stopped for saltz capsules at 22K, another pack gel from support station before hitting 27K and I must say, banana was served pretty late at 30K which I wished it is served at 27K… Had to stop a few times to spray and stretch for incoming signals of muscles cramp but nothing serious actually started to strike. Overtaken by Sunil another 4 hrs pacer at this stretch before got overtaken by William Lim too. Having him overtake me at this stretch means he was doing well for his 2nd half and pull himself away from the main pack also allowed him to pace himself better, perhaps a sub4 dream coming true too. This 10K stretch was completed in 58mins+ with much suffering of pain here and there starting to attack. 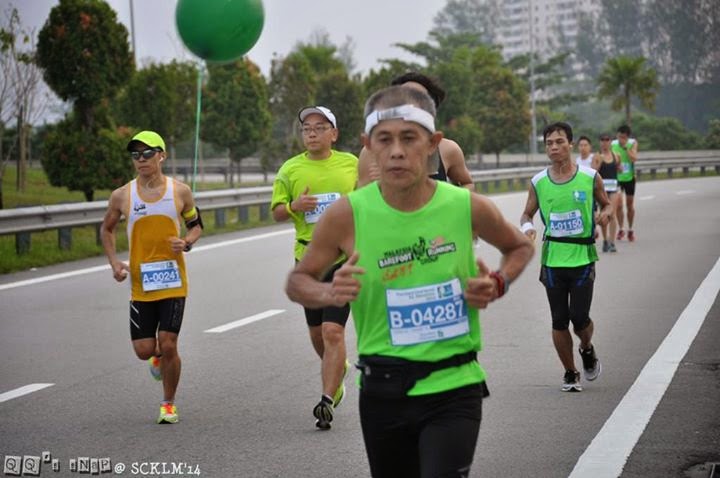 Exiting into Jalan Kuching after 31K, felt the need to whack the last pack of gel I carried before 33K to get ready for Bukit Tunku stretch and got myself heavily sprayed too. Entering Bukit Tunku was like home coming but knowing that this year it is still another 8K to go, my heart died a little inside. The good news was, the caffeine X2 kicked in and I felt the power to complete the next 3K without I have to think about HOW, though overtaken by Richard Tang but I knew I could keep up with him with the remaining 5K to go. Too soon to be happy anyway… 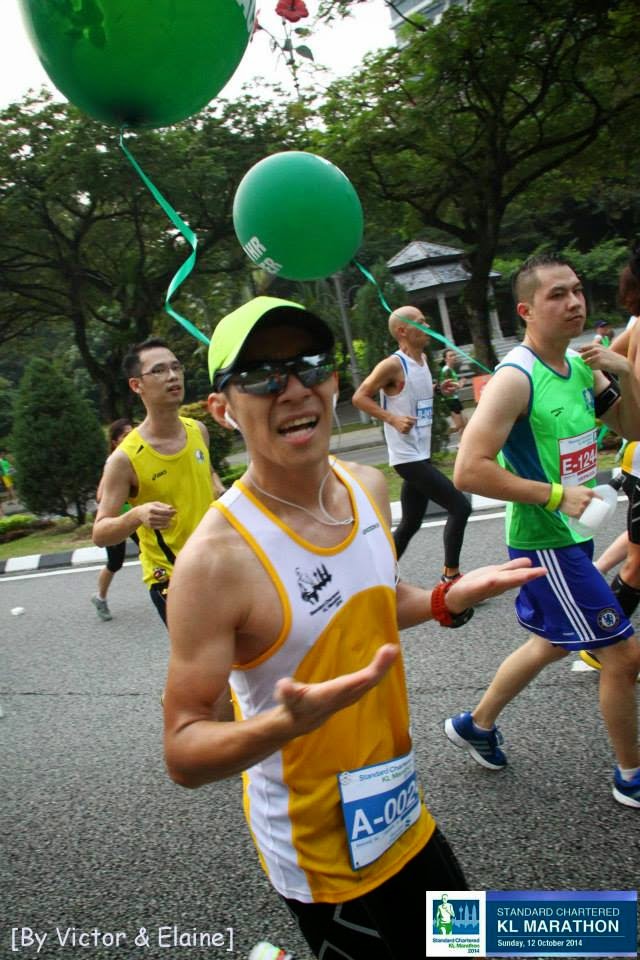 Coming down from Bank Negara and turning into Jalan Parlimen was the worst nightmare for most Full marathoner as we hate the convergence with the 21K runners, who, if appear at this stretch at this time, are 2:30 hrs and above. In other words, crowd was the 1st problem, narrow road was 2nd, 3rd which was the worst, difference in pace would made them moving road blocks with potential lateral movements. At this point, I made up my mind to skip the rest of the water stations and focus on avoiding human collision, and that caused what happened in the final 3K of my run. 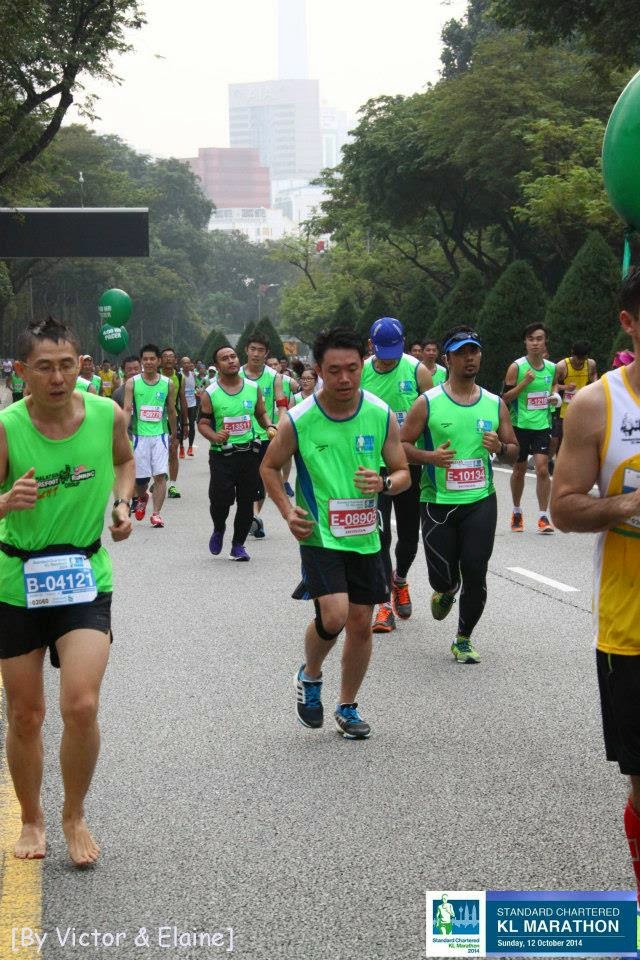 Right before exiting Jalan Parlimen turning into Jalan Damansara, and I was already very close to the other 2 pacers for 4 hrs, 2nd Oh Shit, my left calf finally made its hard pull. I knew I have to handle this or else I will never make it back, quick check on the time, less than 20mins to 4 hrs. I gave it a hard stretch and off I go to catch up while trying to maintain my landing light. Before I hit 40K, 3rd Oh Shit, right calf surrendered and another round of resuscitation. Now, I seriously have to make a choice whether to release the balloon if I can’t make it on time in the next 2K. Every minute really counts… 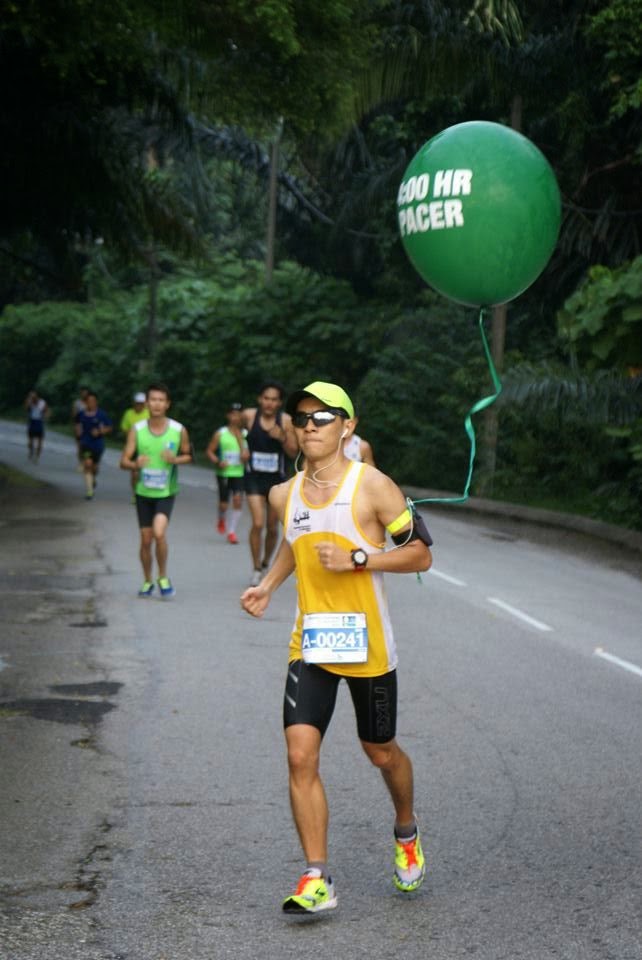 Cornering into KTM area, managed to grab a 100 plus to sip, although it may not help for now but psychologically I did feel better (ya why did I forget about my saltz capsules at all? Lol!). Ran past 41K marker, I hit jackpot with uneven road and left calf came knock knock with the right hamstring rallying too!!! I actually visualize orchestra going on with the muscles spasm… A peep at the watch, with 7mins to go, I really didn’t want to release the balloon now, to run with the cramp, was probably possible if I constrict my calf as much as I could, and do it at both legs so that the right calf doesn’t start pulling at all!

To do that, something else have to give way by working very much harder. The final 1K was very stressful, when I finally caught up with Richard with 300-400m to go, I was much relieved and I simply couldn’t relax any bit until I finally crossed the finishing line… 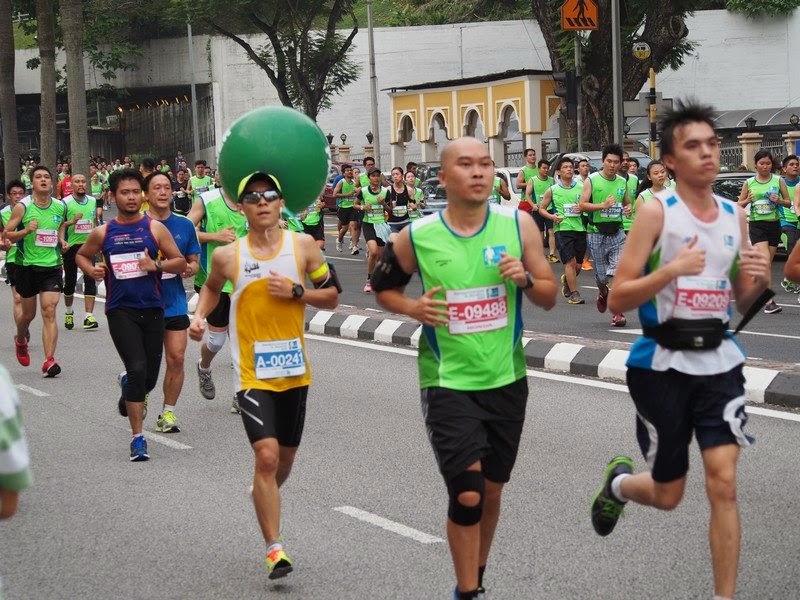 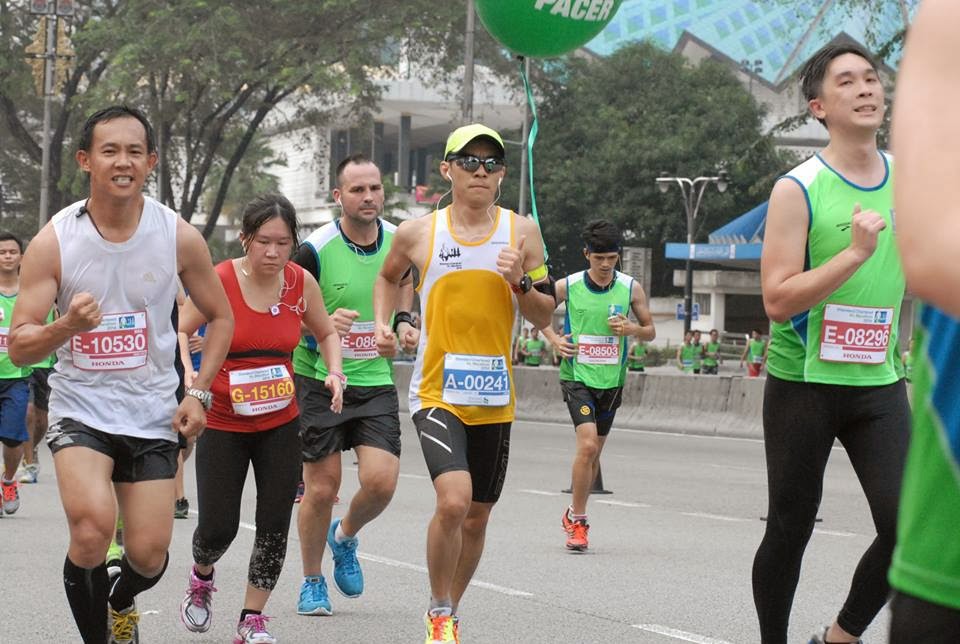 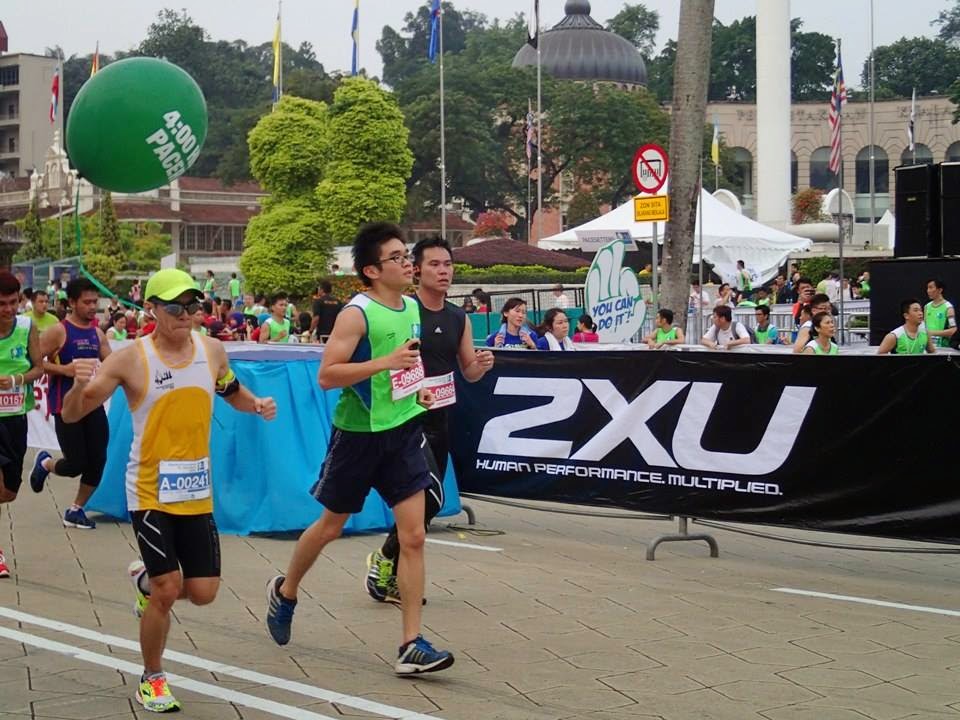 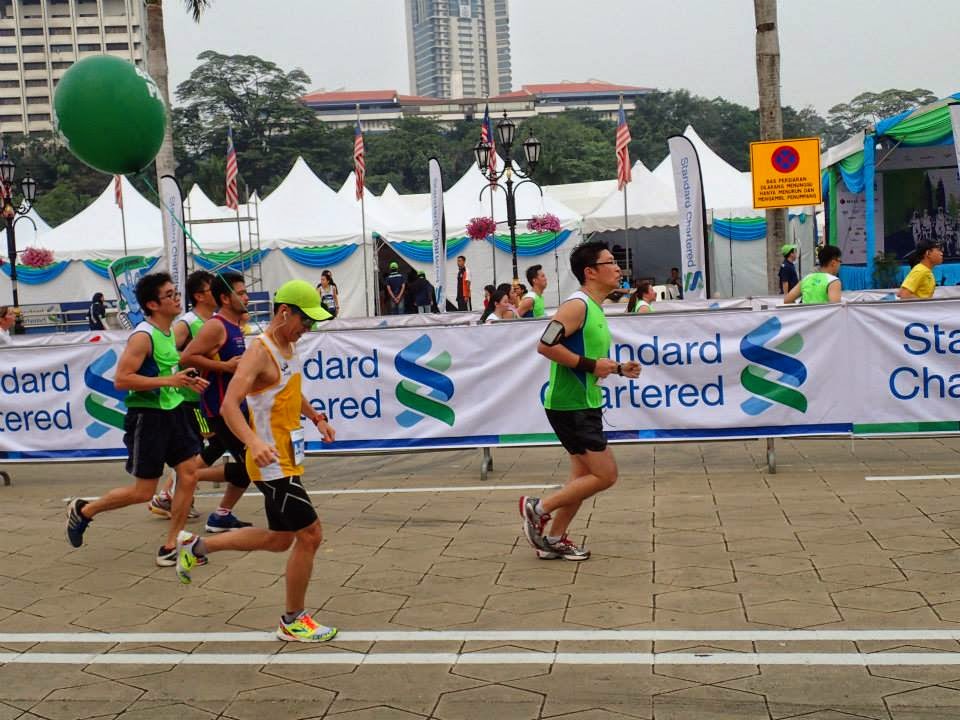 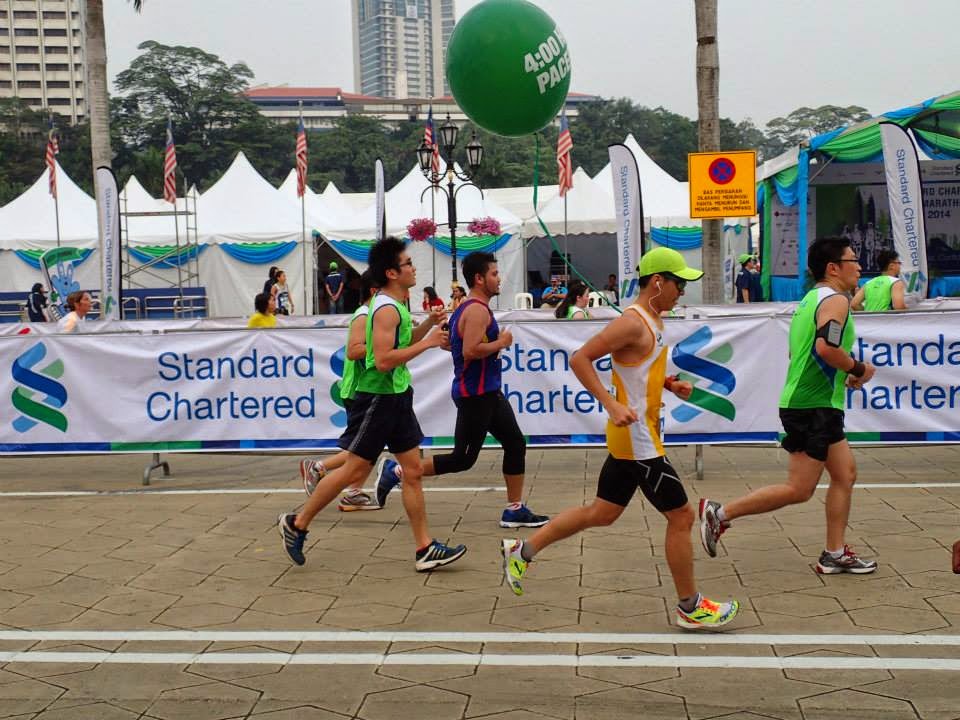 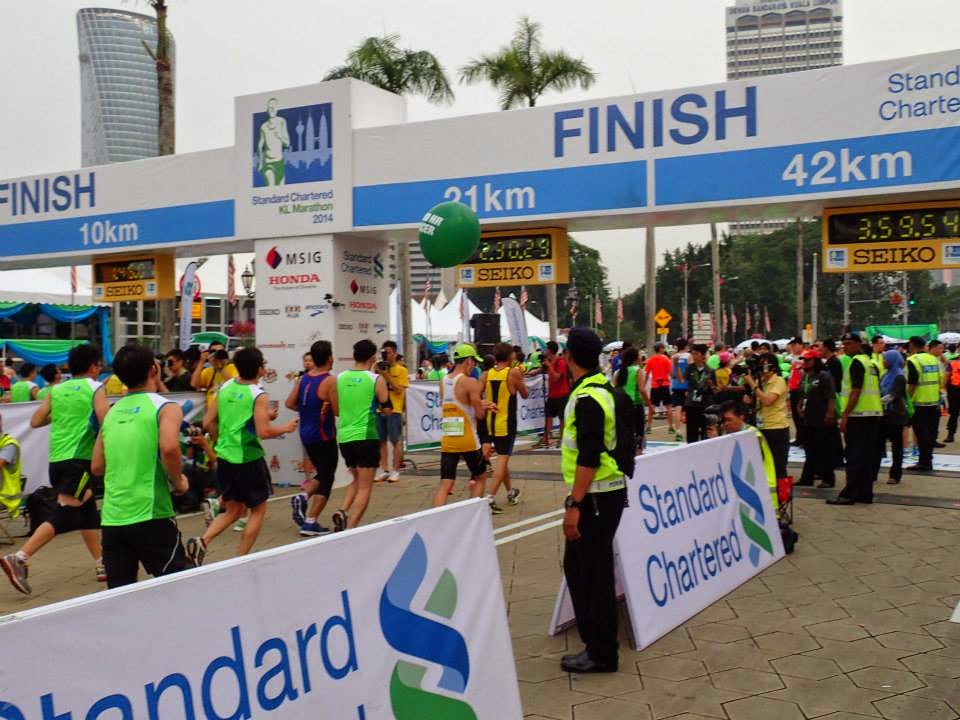 Haven't this kind of suffering finish for a long time...

It was like doing sub4 for the 1st time all over again. I won myself over this run. My hardest sub4 so far and I intent to leave it as the hardest forever. 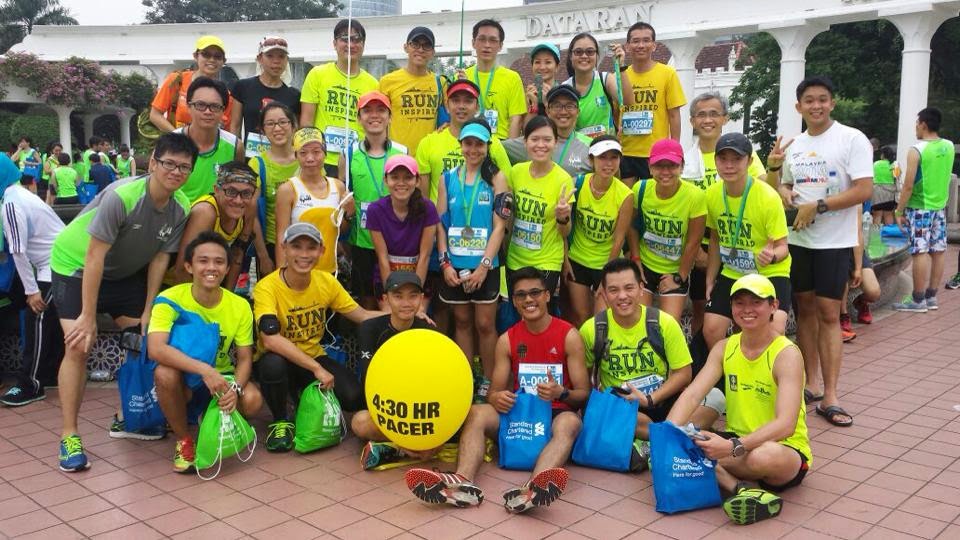 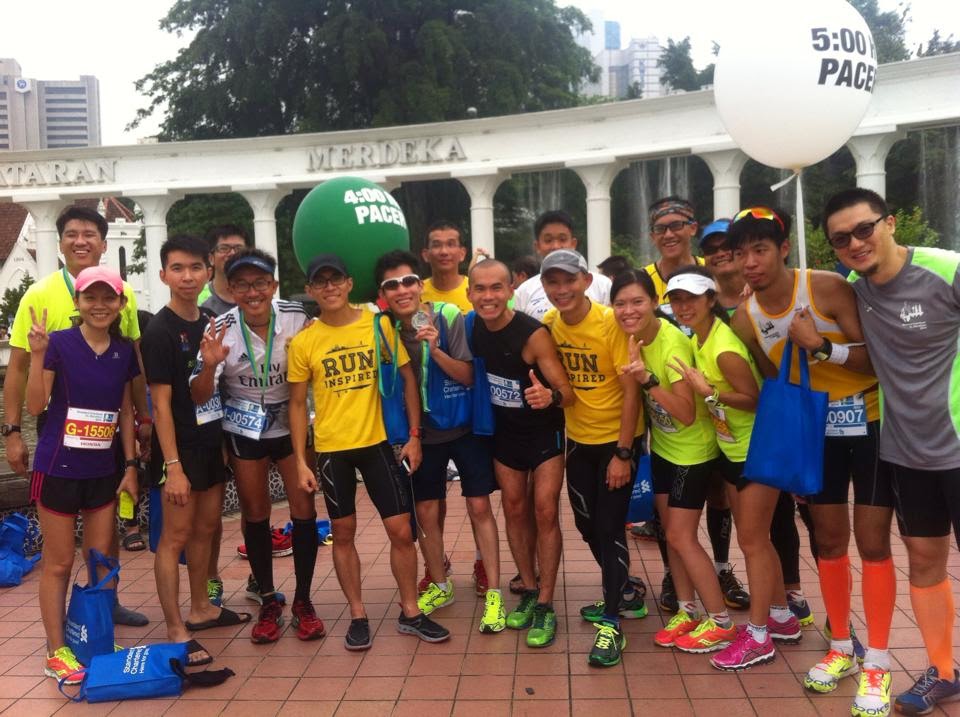 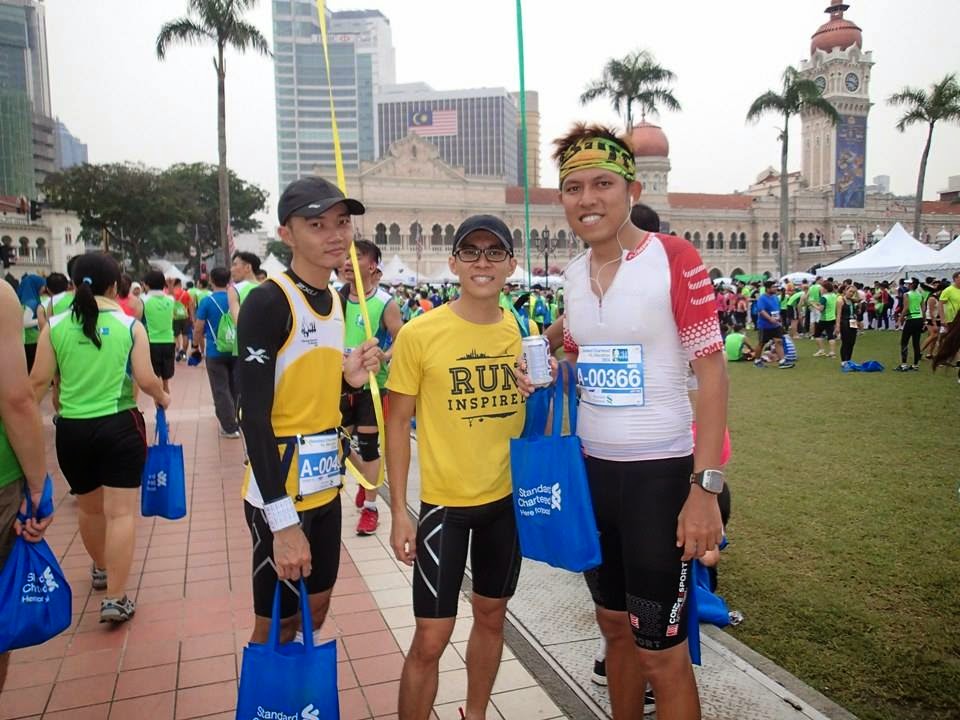 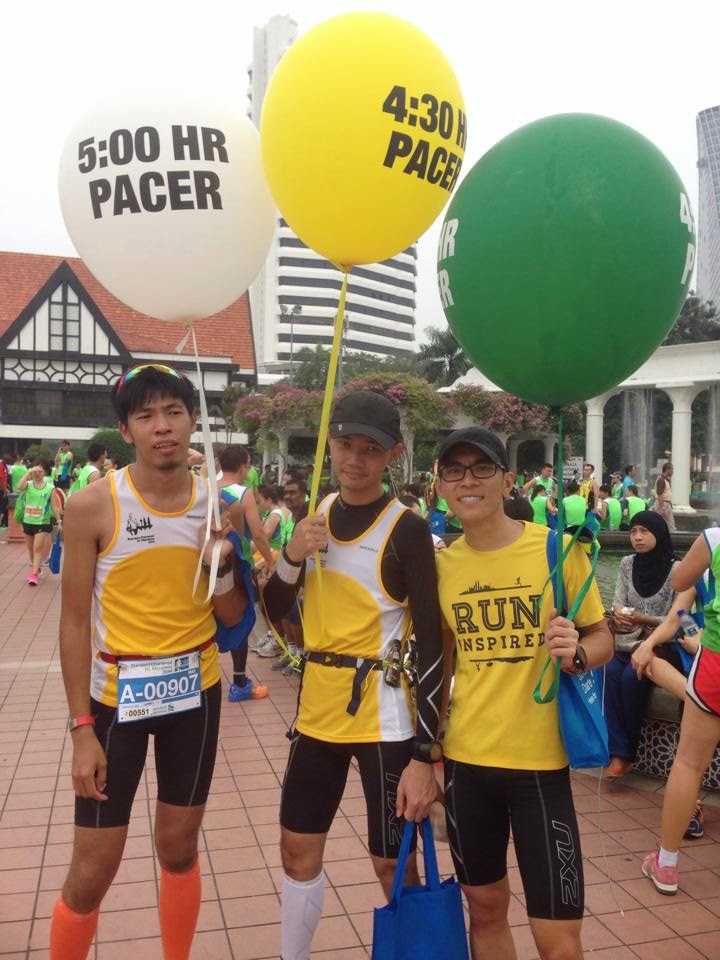 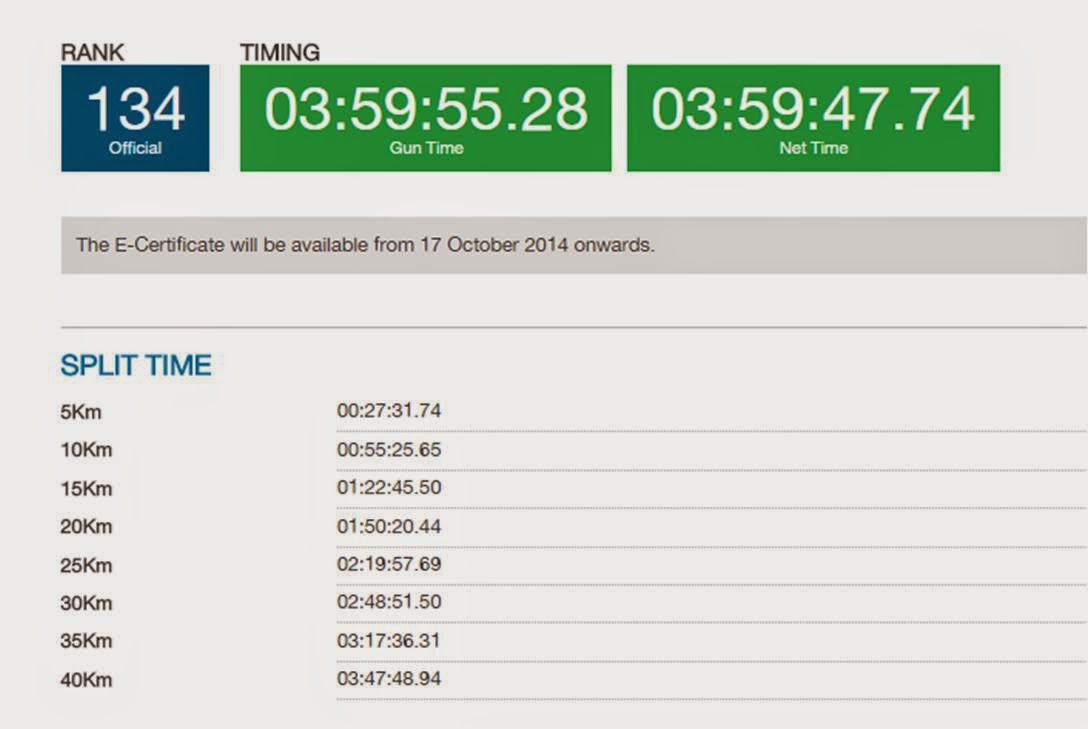 After a year long injury in 2016, I probably should take 2017 easy and focus on shorter distance to allow better healing and restrengthening of my weaker right foot.
Not aiming for anything big this year but to finish races strong and apply better running posture and dynamic in races, let's see where will this lead to me...

YK
Shares life through photos...Just the way I want YOU to see it...

If we can see the world through their eyes, things would be different.